Will there be fish to catch in the future? What are the many flavors of ENSO? How predictable are future ecosystem changes? These were among the many big questions asked at this year’s PCC Summer Institute which addressed “Climate Forcing of Marine Ecosystems: Causes and Consequences.” A wide variety of voices from UW and national and international speakers were heard, from predictions of future distributions of fisheries to detailed analysis of the evolution of zooplankton in the Bering Sea where ice grows and melts. Many participating students and faculty who had not been previously involved in the PCC greatly added to the conversation. 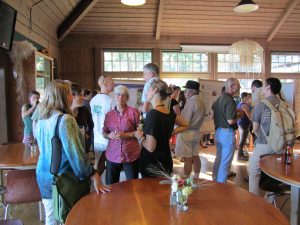 Following the traditional poster session, the opening talks featured Charles Stock (NOAA GFDL) and William Cheung (U. British Columbia) who inspired lively discussion of large-scale climate effects on plankton and fisheries. On Thursday morning, Antonietta Capotondi (U. Colorado) educated the group on the diversity of ENSO events and their effects on the ocean. Nick Bond (UW JISAO) addressed decadal variability in the North Pacific and Andy Thomas (U. Maine) described chlorophyll variability in the California Current. The final highlight of the morning session was a panel discussion about the economics of fisheries management, policy challenges in the changing Arctic, and the management options for ocean acidification. 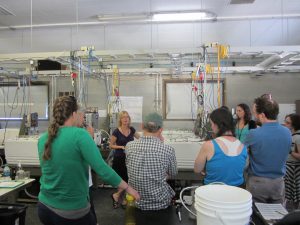 Participants had had the afternoon (and beautiful weather!) to tour the Ocean Acidification Labs at Friday Harbor and to explore San Juan Island: some activities included sight-seeing, hiking, and whale watching. They returned for a special afternoon session in which Charles Stock presented a seminar on the use of IPCC-class models to assess the impact of climate on marine populations. Graduate students were then invited to present 5-minute “speed talks” to introduce their research to the group. It was a new component of the Summer Institute that proved popular with the students and faculty.

That evening, Simone Alin (NOAA PMEL) presented the state of our knowledge of the drivers of ocean acidification in the California Current. She was followed by Morgan Kelly (UCSB) who discussed organismal adaptation to ocean acidification. The day ended with a special evening reception for the Friday Harbor Lab donors and a lecture by George Hunt in the Dining Hall titled “Some indications of the effects of climate change on seabirds: three stories.” The talk was well attended; the reception continued well into the night.

Each aspect of the Summer Institute contributed to the program’s huge success. The PCC particularly thanks Julie Keister who organized the institute, and each of the invited speakers, all of whom presented excellent talks that inspired active conversation among of the participants. We look forward to more discussions about the intersection of climate change, marine ecosystems and fisheries in the future.