The 10th annual PCC Summer Institute was held at Friday Harbor Labs on 14-16 September 2011. It was also a Friday Harbor Centennial Symposium; the theme this year was the water cycle in a changing climate and Chris Bretherton was the SI director. Among the 70 attendees were two distinguished visiting guests, Dr. Yi Ming from GFDL, an expert on global modeling of aerosols and their effect on radiation balance and precipitation, and Dr. Ed Cook from Lamont Dougherty Earth Observatory, an expert on tree-ring analysis and droughts in the paleoclimate record. 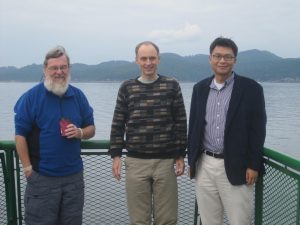 The speakers and discussions covered a broad spectrum of topics including ocean salinity trends as a possible marker of enhanced regional differences between precipitation and evaporation (Greg Johnson of PMEL), the effects of more rainfall in the Arctic on seal dens in wintertime snow over sea ice (Ceci Bitz of the UW Department of Atmospheric Sciences,) how extreme precipitation events seem to be increasing in many parts of the world, but only maybe in the Pacific Northwest (Eric Salathe of UW Bothell), and the relative importance of temperature vs. rainfall variations on African agriculture (graduate students Brian Smoliak and Steven Po-Chedley of UW Atm Sci in collaboration with Alison Cullen of the UW Evans School of Public Affairs). We also summarized how precipitation changes connect to climate dynamics (Dargan Frierson, UW Atm Sci) and hydrology (Dennis Lettenmaier, UW CEE), and why they are difficult to project into a greenhouse-warmed world on regional scales (Chris Bretherton, UW Atm Sci). The diverse group of graduate students from many UW departments did a great job of asking good questions, setting up excellent discussions, and maintaining a tradition of active nightlife. Luckily, the weather was as pleasant as the setting and did not add a strident voice to the dialogue.

We also welcomed in LuAnne Thompson as incoming PCC director and had a collective conversation about how to best help her move PCC forward into its second decade.