Recent measurements of the thickness of many glaciers in both Antarctica and Greenland indicate that they have been thinning over the past couple of decades. Many studies implicate basal melting of these glaciers by relatively warm ocean waters. At the same time, there are large-scale changes in the atmospheric circulation that may be affecting the ocean circulation near these ice shelves. The interaction between the ocean, the atmosphere, and the margins of the glacial ice shelves was the topic of this year’s PCC Summer Institute at Friday Harbor Laboratories on San Juan Island during Sept. 16th to 18th. The 67 attendees from across a broad spectrum of specializations participated in four sessions over the two days. In spite of the broad body of knowledge required to communicate across the disciplines represented in this topic (Oceanography, Atmospheric Sciences, and Glaciology), the eight speakers did well to present their respective topics to the audience. A common thread through all of these talks was the importance of regional variability due to the relatively small scales of the processes contributing to the thinning of the glaciers. 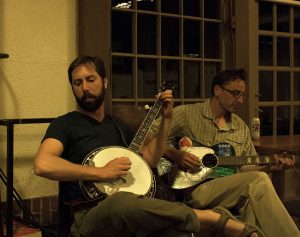 The opening session on Sunday, Sept. 16th, featured talks by two invited experts from outside UW who presented the big picture on observations of the glaciers in both Antarctica and Greenland. Dr. Christina Hulbe, from Portland State University, described the century to millennial scale variations of the various glaciers that make up the Ross Ice Shelf in West Antarctica based upon modeling of the observed features of the ice shelf. Dr. David Holland, from New York University Center for Atmosphere Ocean Science, described the ice-ocean interactions in the fjords of Greenland with a particular focus on Jacobshavn Isbrae Glacier.

The following three sessions were focused on the oceanography and ice shelves, the atmospheric forcing, and the role of the large-scale ocean circulation. Dr. Laurie Padman, Earth & Space Research, described efforts to model the coupled ocean-ice shelf-atmosphere system and its response to atmospheric and tidal forcing. Dr. Ian Joughin, from the Polar Science Center of the UW Applied Physics Laboratory, approached the interactions from the perspective of the response of the glacial ice sheets to changes in the forcing. After having Monday afternoon free to explore the island on a beautiful day, the group reconvened after dinner to learn more about the atmospheric circulation and its response to climate change. Dr. Dargan Frierson, UW Atmospheric Sciences, explained the zonally-symmetric response while Dr. Justin Wettstein, Univ. of Bergen, detailed the zonally-asymmetric atmospheric circulations in the high northern latitudes. During the final morning session, Drs. Greg Johnson (NOAA Pacific Marine Environmental Laboratory) and Alex Orsi (Texas A&M) described decadal changes in the properties of Antarctic Bottom Water – a water mass that is formed at specific locations on the Antarctic continental shelves.

In addition to the oral presentations, there were several posters displayed in the Dining Hall throughout the meeting – providing fodder for interesting discussions during the welcoming reception and encouraging interactions between graduate students and visiting researchers.