Do you like playing games? I’m talking about board games, 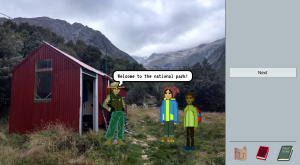 cooperative team challenges, outdoor sports… If you’re a fan of getting your game on, you are not alone! Engaging in creative play provides captivating experiences that appeal to many people in ways that other types of experiences simply can’t match.

Not only do games entertain, but they can also provide effective tools for learning, particularly about topics that are difficult to communicate about. I took advantage of the 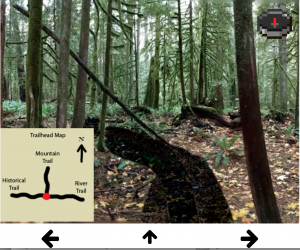 captivating nature of gameplay, building National Park Adventure, a computer game to engage an audience about climate change. Specifically, I focusedon the impacts of climate change in national parks. You may be thinking: how can a computer game hold its own against getting people outside and directly connected with a natural environment? And in truth, it can’t compare. But when access to the outdoors is limited and when people only have a short amount of time to spend doing any one thing, a quick gameplay experience on your own screen can serve an important role in getting folks one step closer to the real outdoors.

This project weaves together several of my interests: 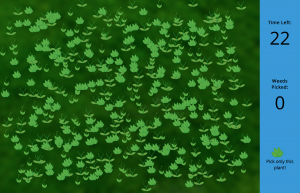 climate science communication, non-traditional approaches to education, and the wonder of the great outdoors. Of the many ways to communicate climate science with the public, facilitating connection with the natural world and understanding of specific climate impacts can be particularly powerful. My goal in this game was to bring access to and knowledge about national parks and climate change to promote such connections, regardless of whether it’s followed up with an actual trip out the front door.

This project was initiated by NatureBridge, an outdoor education program looking for a computer game that could provide useful background knowledge to K-12 students before coming to their campus in Olympic National Park. We developed a game play experience that consists of navigating your character through the trails of a national park. Through exploration, you have various encounters involving people, animals, and natural features that each impart a lesson about climate change and its impact in the park. Sprinkled along the way are fun and challenging mini-games, as well as journal questions to prompt deeper thinking about the complex issues introduced around humans and the environment. This game was designed for use in a classroom setting, where the completed journal could be turned in as an assignment, but the game can also be played by anyone interested in learning more about climate and national parks.

The game was created as a collaboration between four students at the University of Washington, each contributing a different skill set. I brought knowledge of climate science and national parks for the game content, Andrey Butenko developed all the code for the game, Rikki Parent designed all of the graphics, and Erin Riesland shared her expertise in place-based education. We came together through Dargan Frierson’s EarthGames Studio, a UW class that groups undergrad and graduate students from across campus with diverse backgrounds. Game development, from initial brainstorming through final coding tweaks, took place over the course of two years. I highly value the opportunity to have worked as part of this team. Although sometimes it was challenging to keep everyone on the same page, the combination of each of our backgrounds was crucial in creating a dynamic final product. Needless to say, I would never have been able to create this game on my own!

The original target audience was K-12 students, assuming that different age groups would engage with the game at different levels, but the results of our evaluations prompted us to change that target to middle school and older. We tested our game with both the youngest and oldest students we expected to play. Ten undergraduates in the EarthGames Studio class provided important feedback on what they learned through playing the game and how they perceived the experience. Later, we tested the game with twelve elementary students between the ages of 6 and 10. While the undergrads increased their knowledge about climate change in national parks, the elementary students could hardly make it through the game with the amount and level of reading required. Rather than adjusting the reading level to accommodate a younger audience, we opted to alter the range of the target audience. This allowed us to retain the depth of material presented in the game, which had resonated well with the older students.

I am very grateful to have been part of creating this game. I learned a lot about what is required to develop a game and how to best work within a team of diverse skillsets – not to mention learning some really interesting facts about climate change in national parks! This project gave me the opportunity to present during an education session at the Fall 2018 American Geophysical Union Meeting. My talk was well-received by the audience and led to a write up in the widely-circulated AGU Eos journal. Finally, this project has inspired me to continue working on this idea of communicating about climate change through connections to the outdoors, particularly through avenues that incorporate technology.

National Park Adventure is freely available to anyone with internet access. Whether used in the classroom or played by individuals, its goal is to communicate the impacts of climate change in national parks. I hope that the game inspires players to care more deeply about climate change issues through a connection with the outdoors, even if that connection is built through technology. I welcome any thoughts or comments you have about the game or about climate communication in the outdoors more broadly. Please feel free to get in touch with me at the email address below.

Emma Kahle earned her PhD from the University of Washington where she studied how Earth’s climate has changed in the past using data from Antarctic ice cores. She is now engaged in a variety of outdoor projects around the world related to studying, teaching, and communicating climate change. You can reach her at emmackahle@gmail.com.